Ah, gadgets… can’t have too many of ‘em!

It’s hard to think of anything more useful and relatively low-cost for the electronics lab than the venerable digital multimeter.

It’s good to have at least two (some people say four: V & I for in-/out-measurements). They don’t have to be identical. In fact, the one I use most is the Voltcraft VC170 as it’s very small and does everything I need.

I do have others, to measure temperature, or humidity, or light, or sound levels.

But the other day, I ordered this from eBay: 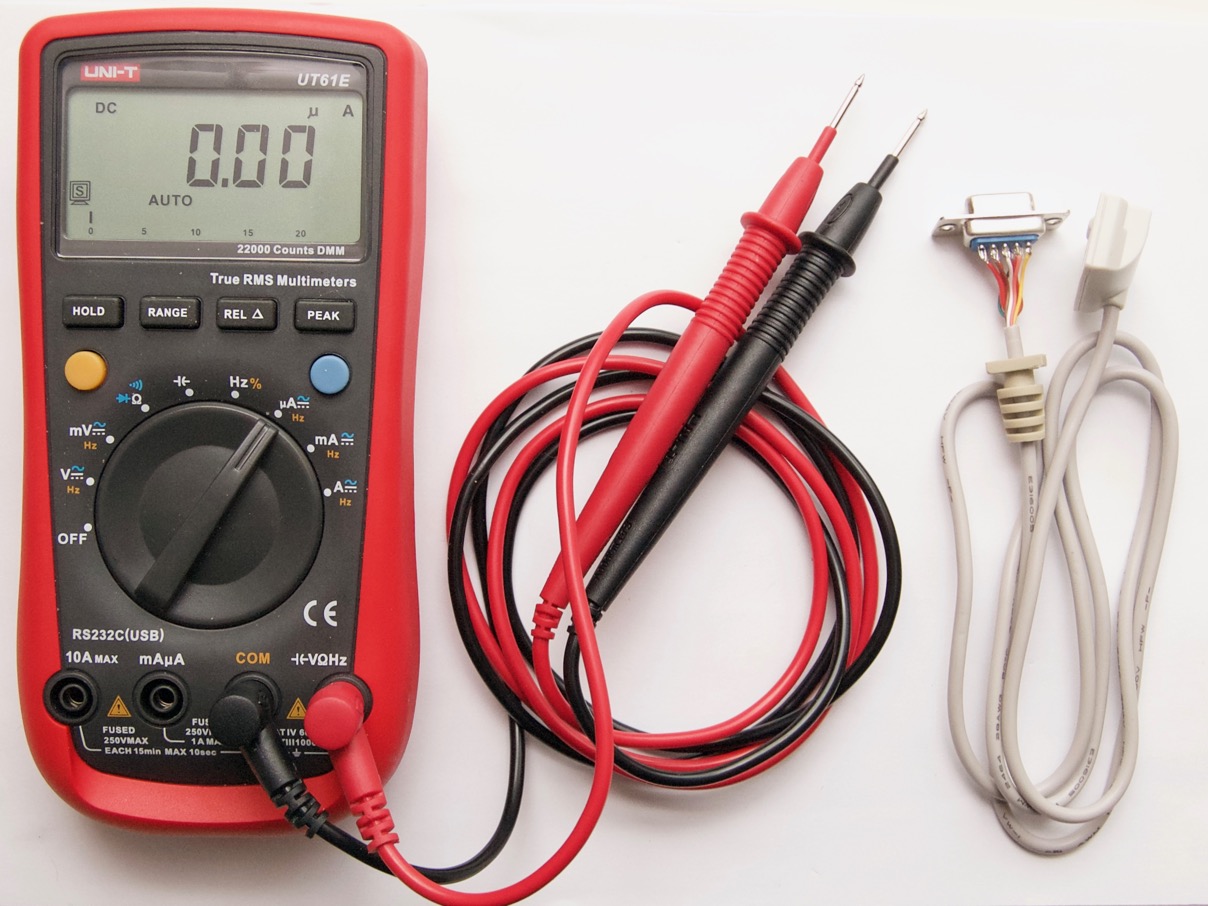 The reason is that the UT61E gets decent reviews and has quite interesting specs:

There’s a bar chart readout on the bottom, which will respond much faster than the UT61E’s few-times-a-second digit update rate and helps to see quick changes and get an immediate feel for the live readings (especially if you disable auto-ranging).

In my opinion, having two multi-meters is a must (start off with a cheaper model, and get a better one later on). And the VC170 + UT61D combination works great for me.

One thing you can do with two, is use one to measure the burden voltage of the other. First we setup an adjustable current circuit: 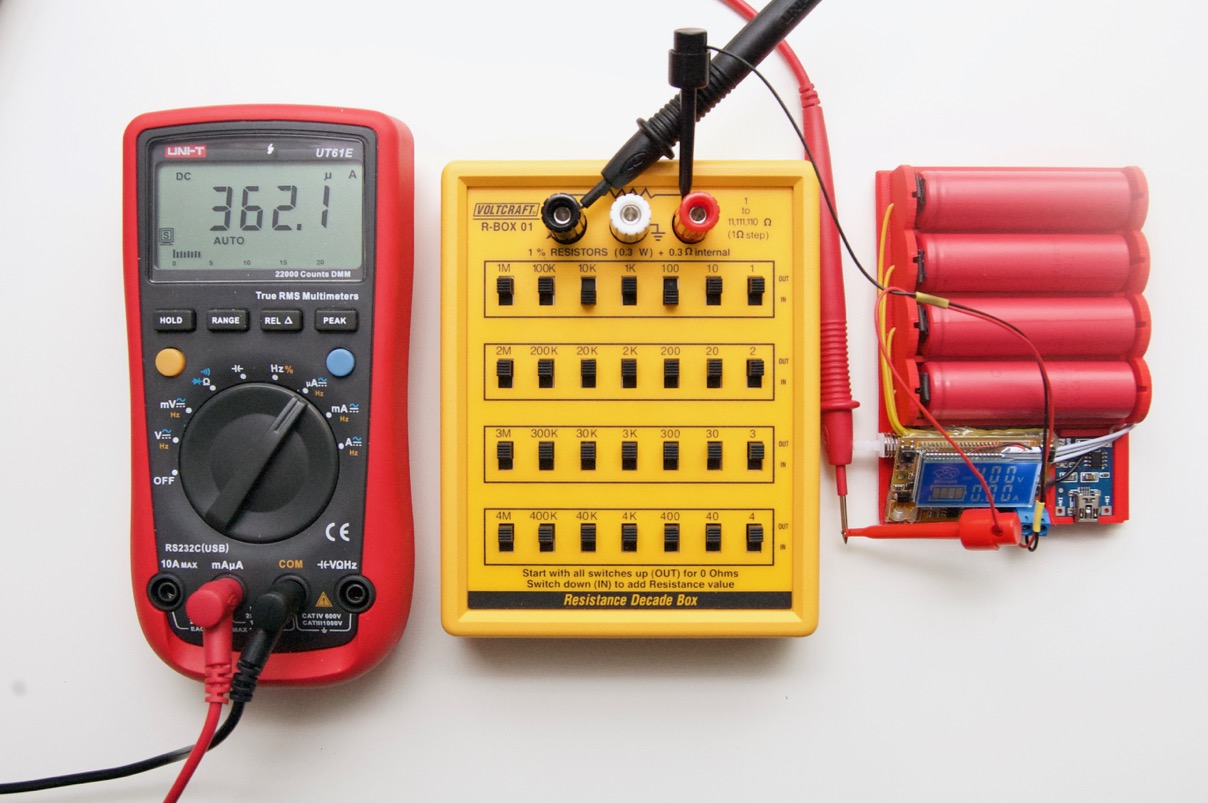 From left to right: a multimeter in current measurement mode, a variable resistor, and a power supply - all connected in series.

That’s burden voltage: the multimeter itself has a certain resistance of its own, adding an extra voltage drop, so the 10 kΩ resistor is in fact getting less than 4V.

With a 2nd multimeter, we can measure it: 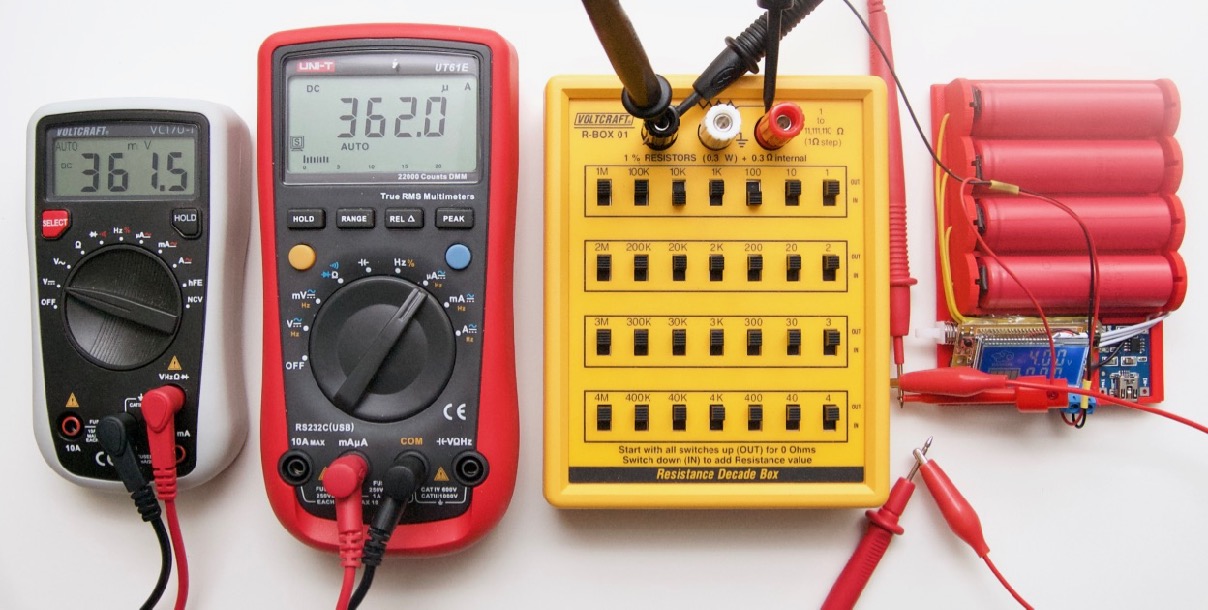 The VC170 is reading voltage across the UT61E, which appears to have a 362 mV drop. Leaving ≈ 3640 mV on the resistor, which dutifully follows Ohm’s law and lets about 364 µA through - as measured.

That could be very inconvenient: if we insert the UI61E in the power supply loop of a JeeNode Zero, will it lower the supply voltage left for the JNZ in a major way?

Yes and no: voltage drop is usually linear, with less current leading to less of a voltage drop. At really low current levels, the effect of an UT61E in series will be much smaller:

Sooo… not only is the relationship linear for these ranges, the effect the UT61E has also drops (the supply was kept at 4.0V).

When we’re measuring current in the low µA and sub-µA range, the UT61E will work splendidly. Above 100 µA, it gets messier.

This is for the µA range, which goes up to 2,200 µA, i.e. 2.2 mA. Luckily, the voltage drop does not rise linearly: for 2 mA, the drop is 0.8V, there’s probably a diode of some kind kicking in. If 0.8V drop is ok, then this meter can be left in-circuit even with 100 mA or more current (the meter will beep and report overload, but won’t be damaged). So for a JeeNode Zero, powered from 5V or fully-charged LiPo, we’ll be fine.

In the mA mode, there’s virtually no drop.

What you get with the UT61E, is the ability to measure deeply into the sub-µA range - perfect for a JNZ entering low-power mode.

And the out-of-range beep can tell us when the RFM69 is on - not a bug but a feature!

The moral of this story is: burden voltage is very real - don’t ignore it. But with a bit of planning, a UT61E can be used to obtain excellent readings in the sub-µA range.

Plus all the other things the UT61E can do.

And if you’re into that sort of thing, you can search for “ut61e mod” on YouTube …