Another post about the JET project. This time around, I’m trying to come up with simple data structures to get the job done, i.e. supporting a PureData-like dataflow engine, able to fit in very small µC setups.

That means minimal redundancy, given the limited amount of RAM. One useful trick is to store int indices where possible, instead of 4-byte pointers to the various items.

Apart from processing dataflow messages, I also want the whole setup to persist across power cycles, i.e. the entire dataflow circuit has to be stored in flash or in EEPROM.

Here is a first tentative design. It may not make much sense to you right now, but I need these diagrams - as “notes-to-self” - even if some will change again later on.

The gadget is the central object. Each one has “inlets” which accept messages and “outlets” that can send out new ones: 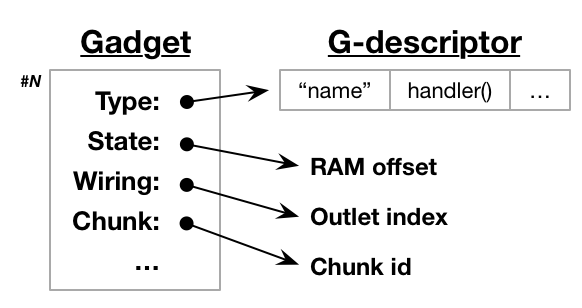 These gadget objects (i.e. instances) have a fixed size, their array index is used as “id”.

The “type” field refers to the actual code for the gadget, which will be called as follows:

The “state” points to a RAM area allocated for that gadget, “wiring” determines where to send each outgoing message, and “chunk id” refers to optional GC’d memory.

To save space, “state” is an array offset. The size of each area can be calculated from the next gadget’s state offset, since all areas are allocated in the same order as the gadgets:

The same trick is used for all the “wiring” entries, since each gadget can also have its own specific number of outlets: 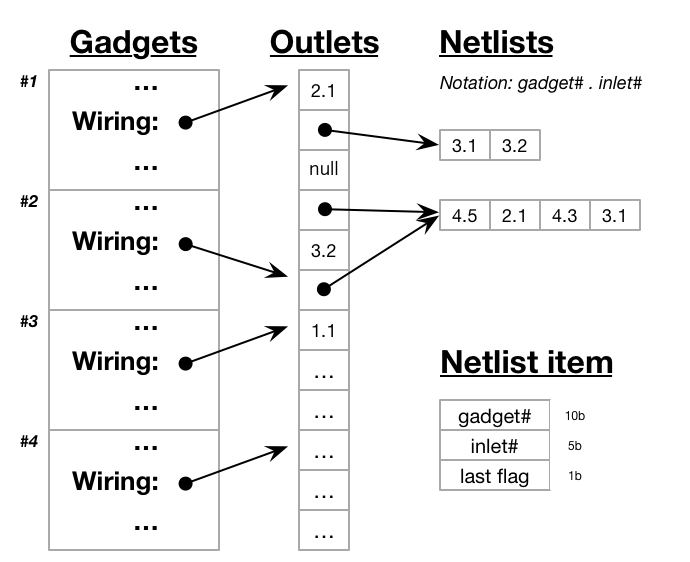 In the example shown above, gadget #1 has 5 outlets, #2 has 1, and #3 has 3. Note that there will need to be a dummy last gadget to take care of the boundary conditions.

Each outlet points to a “netlist”, this is an ordered list of inlets to receive that outlet’s messages. If an outlet has nothing attached to it, its netlist will be null (see gadget 1, 3rd outlet). Multiple outlets can send messages to the same net (i.e. unlike direct electrical wiring, but like open-collector/diode logic).

When a netlist has only a single entry, that entry is stored in the outlets array itself.

All the above data structures, except states and chunks, can be ROM-based. Since they are just data, the idea is to store them in flash memory, ready for the JET engine to pick up and “execute” on power-up.

For now, I’m assuming there will be very little memory. Gadgets take up 8 bytes, each outlet is 2 bytes, and netlists also need 2 bytes per entry. The limits I’ve chosen allow at most 1000 gadgets, 250 gadget types, 4000 outlets, and 16000 netlist entries. These limits are sufficient for most of the low end STM32’s I’d like to run this on. A mere 100 gadgets should already be enough for a range of non-trivial circuits, I expect.

The way it’s meant to be used, is that there will be a fixed firmware image with the JET engine core and all supported gadget types (i.e. handlers) built-in, and that the “circuit” (i.e. application) is written into a separate area in flash or EEPROM.

Seen from another angle: the JET engine will take care of event handling and the call graph (defined as data, not code!), while the gadget handlers act as the components from which the application is constructed. All the information flow between gadgets takes place as (GC’d) messages, but the gadgets themselves can process and save their own state in whatever (efficient) way they like.

Note that this is just a very early design / thought experiment. There’s no code yet to verify that it’s feasible and makes sense…