Developing in JavaScript for STM32 Nov 2015

Espruino runs on boards created via crowdfunding - the latest being the Espruino Pico. This is an absolutely tiny USB-stick like board, with a fairly powerful STM32F401 µC: 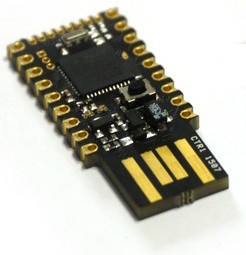 But Espruino is also the name of the JavaScript environment itself, which is fully open source and embraces many other µCs, including the STM32F103 on the ARMinARM.

Although JavaScript as a language is a almost half a century more recent than BASIC, the Espruino setup has a very similar feel to it: you type in commands, and it executes them.

It’s very easy to try it out using ARMinARM, by installing it with the setup script:

Now we can connect to the board via a serial connection from the Raspberry Pi:

This is a fairly old build, but no matter - the essence is all there. Note that to get that nice welcome screen, you’ll need to press the reset button on the ARMinARM board (next to the single-row header).

As you can see, Espruino knows its (double-precision) maths, just like Lua:

But it also has a Node.js like feel to it:

Quite a bit so, in fact, since it uses the same async callback style to deal with time delays:

The call returned immediately, and the text was printed 1 second later. This is extremely useful in an interactive context (just as in Node.js), because you can make things work in the background while still keeping access to a responsive command line console.

So let’s make our LED blink, shall we?

As you can see, it’s a fairly comforting mix of Arduino’ish calls and a Node.js’ish structure. Note that the “>” and “:” prompts were generated by Espruino, and so was the “=1” result.

That’s it. We get a prompt back, and the LED is happily blinking in the background. To stop it, we can type “clearInterval(1)” (1 being the id returned by setInterval).

Just as with eLua, there’s a lot more to Espruino. Scroll down on the reference page, to see what the software can do (and check out the images at the top for a sample of the boards supported by Espruino). There’s also valuable info on the wiki, and an active forum.

Next, you should have a look at the growing list of modules (full dir list). These modules are implemented in JavaScript, although some require the presence of pre-compiled C library code (see the “Built-in Functionality” on the reference page). They’re even minified.

So, for example, I2C and SPI are built-in as efficient C drivers, but lots of devices attached that way are simply a bit of JavaScript glue code. This is extremely flexible.

It becomes even more interesting in combination with Espruino’s Web IDE - check out the 5-minute video on that page. This is aimed at laptop / desktop use, but could probably be wrangled into connecting to any serial port across the network (using ser2net or similar), including a Raspberry Pi with ARMinARM board. Espruino’s Web IDE offers a surprisingly simple way of writing bits of JavaScript, with access to all online modules using nothing more than a simple “require” call in your code. It’s hard to describe, but very much has the feel of using the Arduino IDE - except that there is virtually no machinery under the hood!

Back to Espruino, as it’s running on the STMF103 µC itself. It’s very JavaScript-like, but there are differences with such a tiny implementation. There are also so some fairly severe limitations, depending on which µC you’re running it on. The two main ones are:

Having said that, this does not rule out the use of Espruino for low-power applications, as long as the duty-cycle of being awake is low enough. Spending 1 sec every hour, still means that the setup can spend 99.9% of its time in deep sleep mode, drawing a few microamps.

As with eLua, there is a way to make the µC run Espruino code on power-up: see onInit.

And see this design page, if you want to know more about some trade-offs in Espruino.

One more point is worth noting here: given that Espruino is JavaScript, and that Node.js will run nicely on a Raspberry Pi, this can create a context where everything you develop is written in the same language: JavaScript in the small and in the large ! There can be some advantages to this - data exchange in JSON, for example, becomes trivial.

The same can be said of eLua + Lua, and of MicroPython + Python, of course. Although with JavaScript, this even carries across to the browser and therefore also to the desktop, using a technology such as Electron or Chromium Apps. As to whether it’s important to write everything in (nearly) the same programming language: that’s really up to you.

The main takeaway from all this, is that the traditional “embedded C/C++ programming” approach is starting to see alternatives, at least for the somewhat larger µC’s. They require more resources, but at times that’s irrelevant. Let’s call this option: “BASIC, Reloaded” !