Let’s see if we can build an FPGA-based system. The biggest challenge is that everything involved is completely different from software and hardware design. It’s a new ball game!

There are too many unknowns and new aspects to this to tackle it all at once. Fortunately, there are some nice projects on the web to help us forward with relatively little effort.

One of these is Grant Searle’s amazing MultiComp “pick and mix” computer: 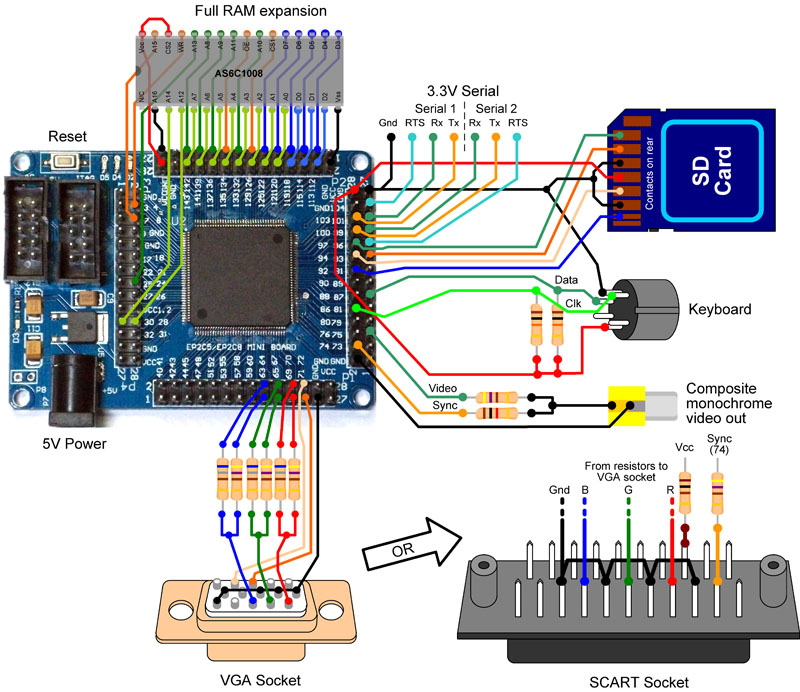 It’s a fascinating example of the flexibility and richness of an FPGA, which requires only a few low-cost parts (all available from eBay, AliExpress, etc).

MultiComp can re-create an 8-bit 6502, 6809, or Z80 microcomputer system from the 1970’s era, including multiple serial interfaces, a PS2 keyboard interface, various types of video out, plenty of RAM memory, and lots of permanent storage on an SD or µSD card.

The beauty of Grant’s scheme, and the web pages he has set up with all the information you need, is that you can start with an absolutely minimal setup to test the waters and figure out all the issues listed above. The design is written in VHDL, which is one of the two main languages used for constructing FPGA designs (the other being Verilog).

This is all it takes to get to a working configuration: 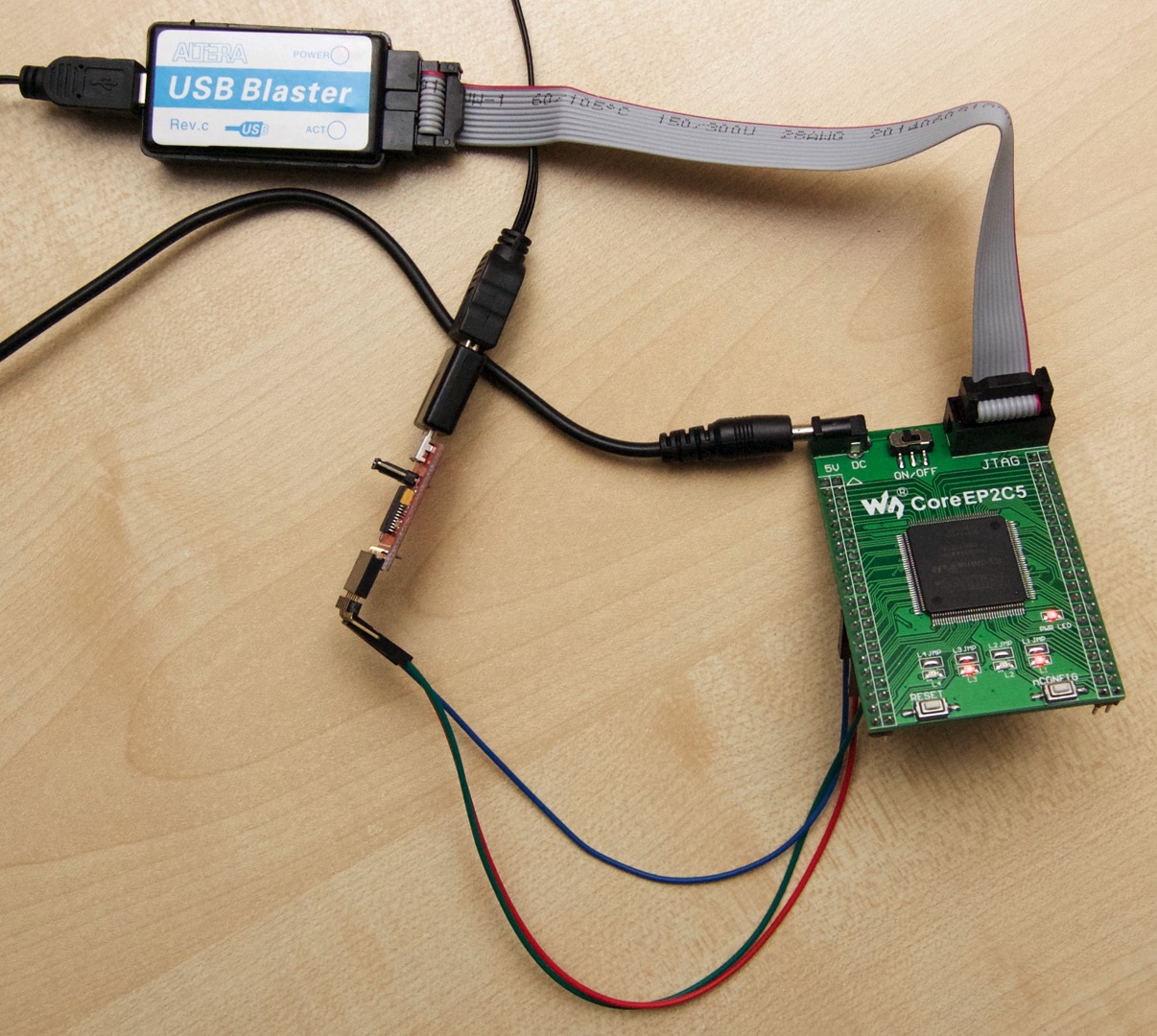 In this case an EP2C5 Altera FPGA board from WaveShare, a USB Blaster to program that board, and an FTDI serial interface to talk to the final configuration. Oh, and 5V power. If you look around on eBay, you’ll find several alternatives for a total cost of under €25.

There are - even with this minimal setup - still many choices to be made. So let’s pick this:

After a day of following Grant’s instructions, figuring out all the details, getting the free “Web Pack 13.0 sp1” IDE from Altera going (requires Windows), this will be the result:

Which, frankly, should make you fall off your chair (with a soft landing, please!). Without any soldering, thousands of logic elements have been tied together (via bits!) to implement a full computer not unlike the Altair and Imsai systems which launched the term “Hobby Computer” about four decades ago. It’s a shame that nothing of what’s going on is visible!

Not only does it work, it can run several times faster than the original and draws 75 mA.

By building this, we will have skimmed very lightly over all the intricacies of VHDL. There really is a lot of logic inside this design. It has merely been packaged to get going quickly.

But why stop here? Let’s build a full-scale CP/M system, the predecessor of MS-DOS!

For simplicity’s sake, we’ll stick to the serial port for now. That’s the beauty with FPGAs: you can extend and improve your setup gradually. Lots of spare logic cells to play with!

To run CP/M, we need more RAM, and we need some permanent storage. Instead of those old clunky floppy disk drives, Grant has set up an interface to an SD (or µSD card). Which is not only infinitely smaller, and considerably faster, it also has immense storage capacity compared to floppies. For now, we’ll get sixteen 8 MB “drives”, called A: to P: (so now you know where Windows got its conventions from…). Note that the SD card is not formatted as a “VFAT” disk we can read elsewhere - it’s used as 16 x 8 MB of raw disk blocks.

Let’s add the RAM and SD card, using point-to-point wiring since this is a one-off project.

For the SD card, we’ll actually use a µSD-to-SD adapter, as this makes a perfect “socket”: 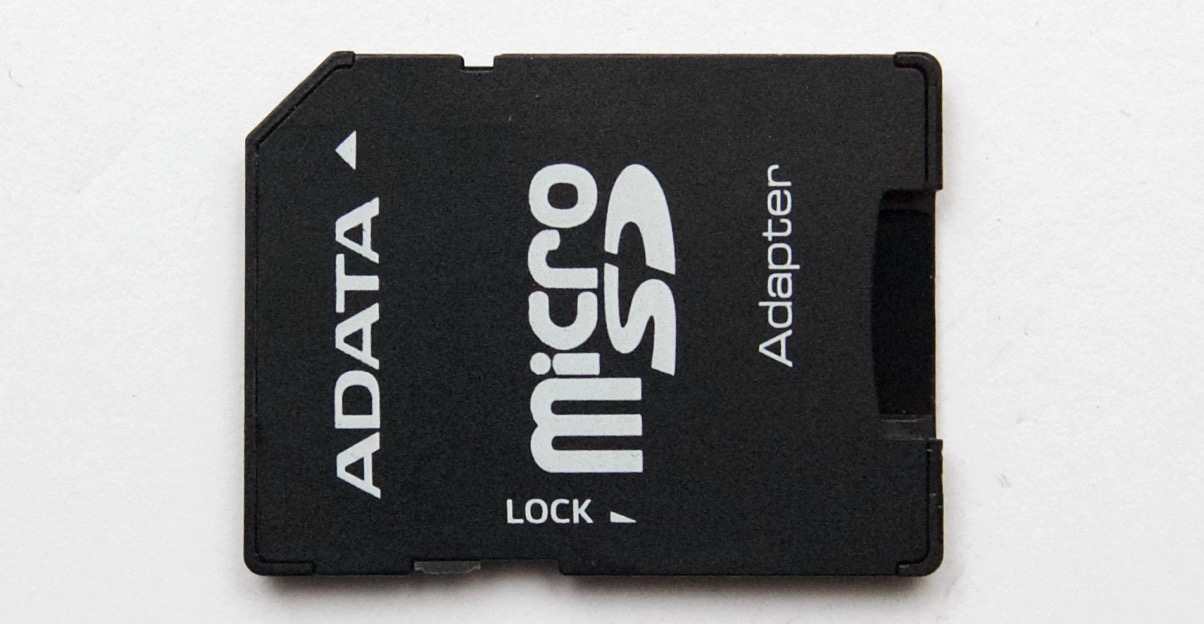 We can simply solder it in, and use it to insert a 2 GB µSD - it even has a “lock” switch! 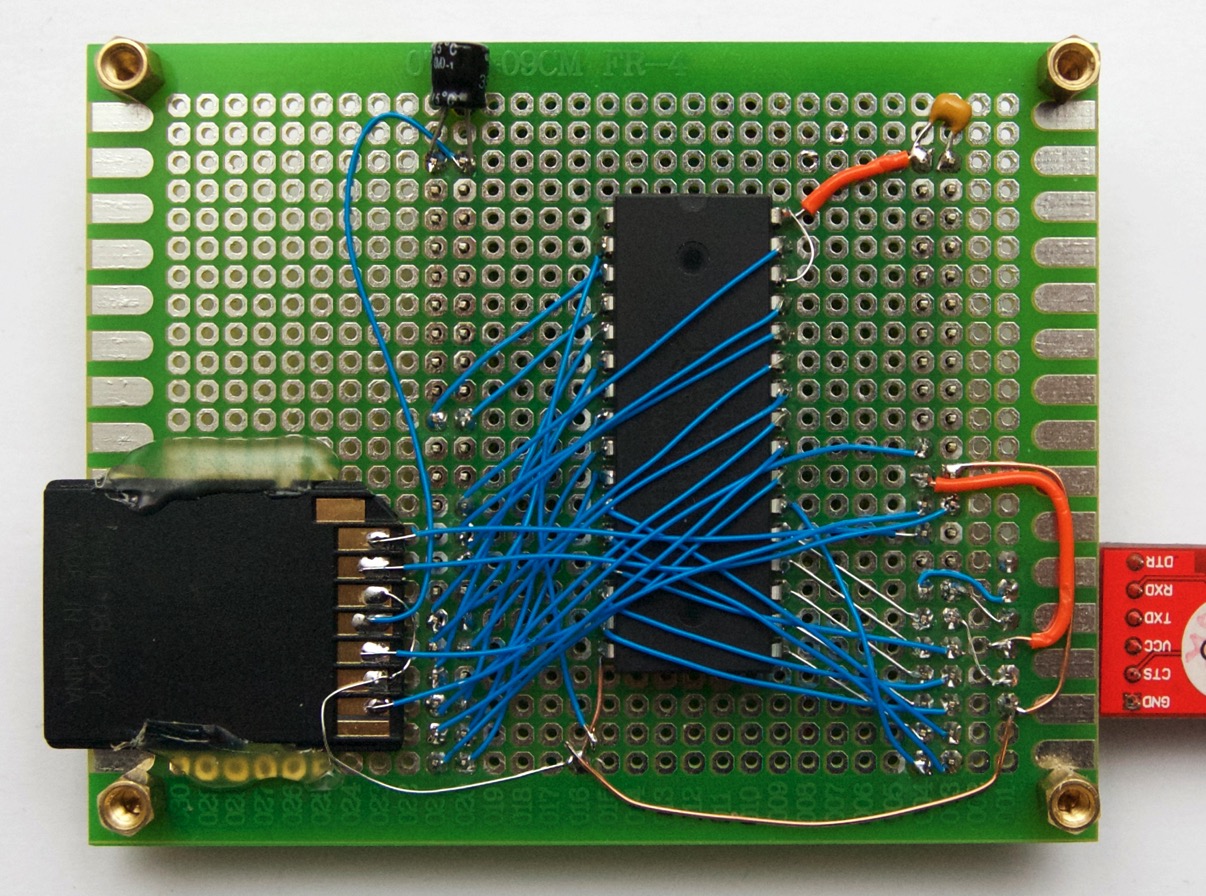 All wired up, and fastened with hot glue. Note the SD adapter sticking out for easy access. There are also some extra capacitors, to help avoid spikes and supply issues. Just in case.

Here is the result of all that hard work, again following Grant’s Z80 CP/M instructions:

And then, jumping through a few more hoops to get the CP/M system loaded onto that µSD card (lots of chickens and eggs, all nicely resolved when following the instructions), we get:

This is running from an SD disk image by Oscar Vermeulen, who built this setup and then built an image with lots of CP/M-era software - see his Obsolescence Guaranteed page. 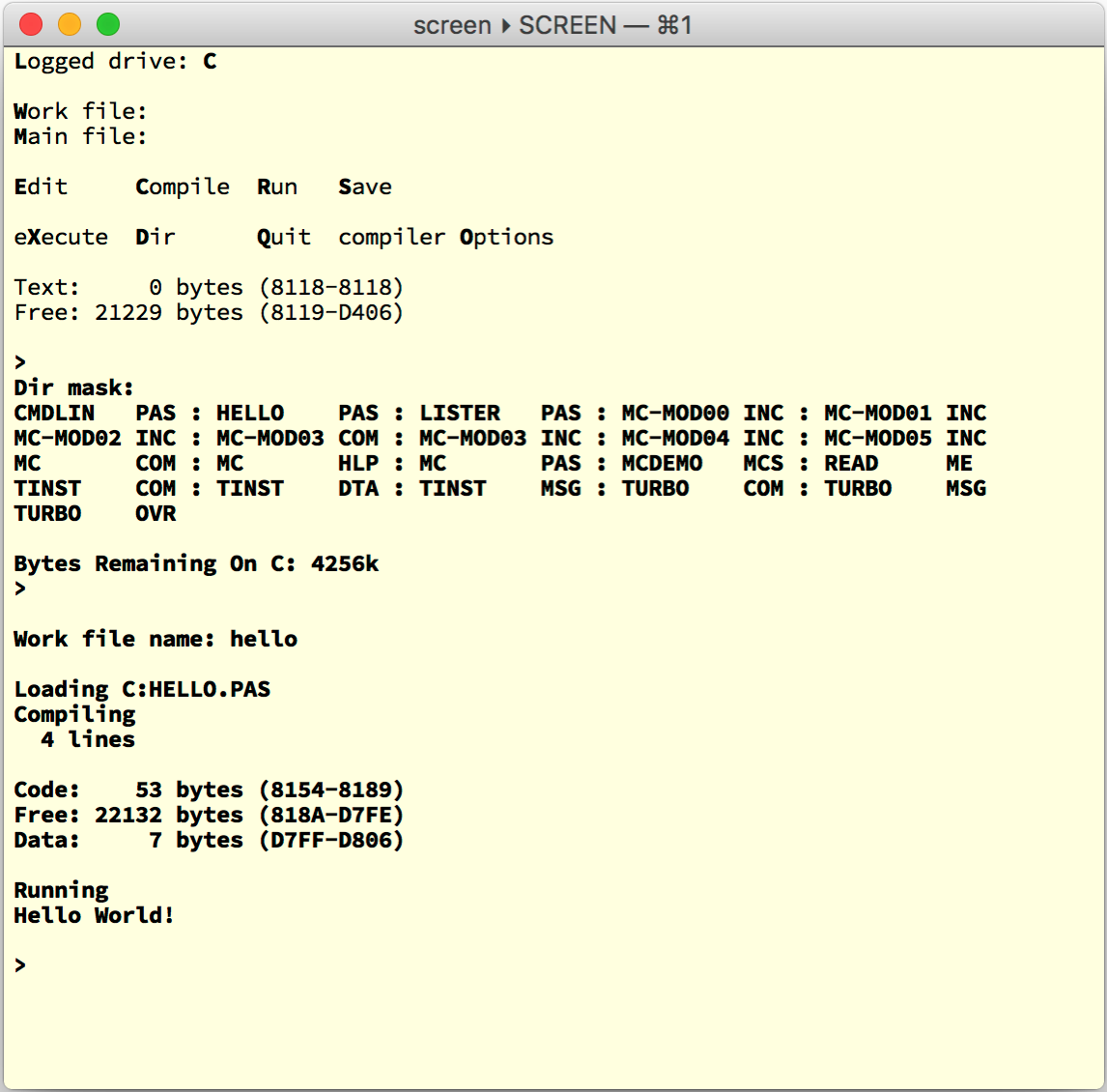 And here is the final build, fitted into a nice geek-friendly clear plastic box: 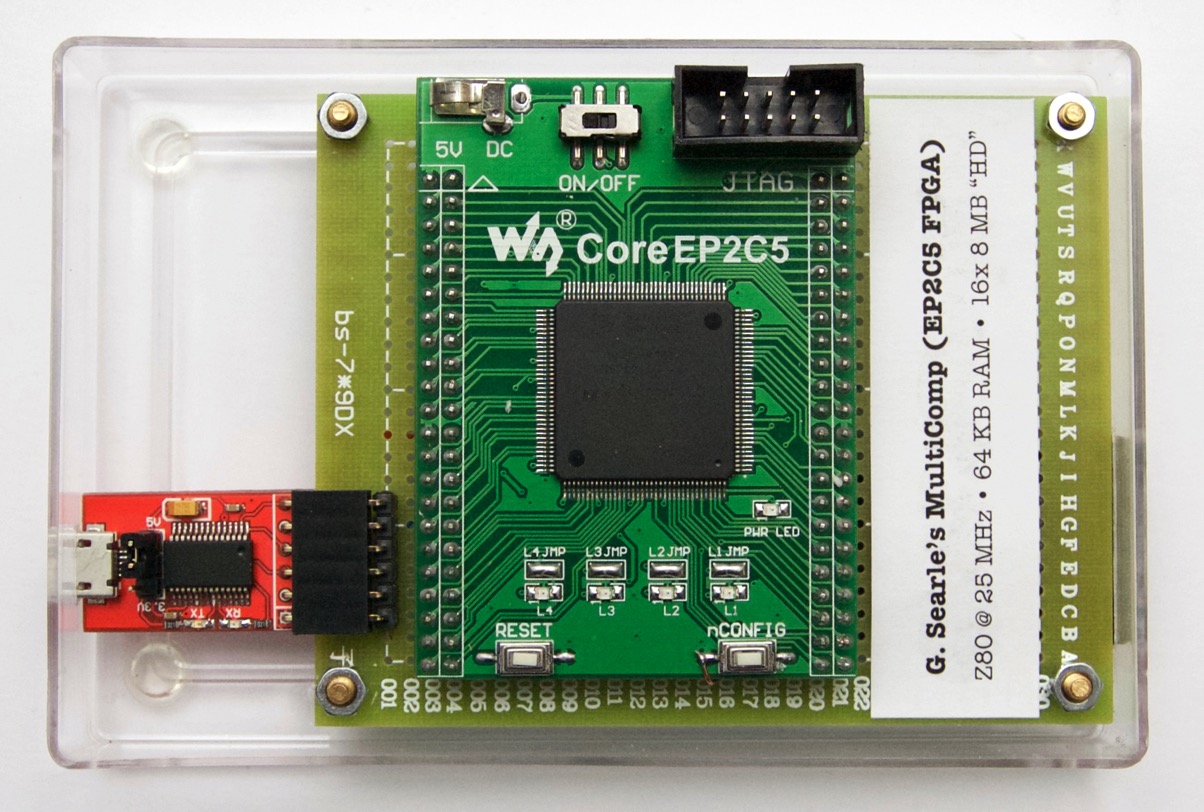 Finally, once again, the underside with all the gory details: 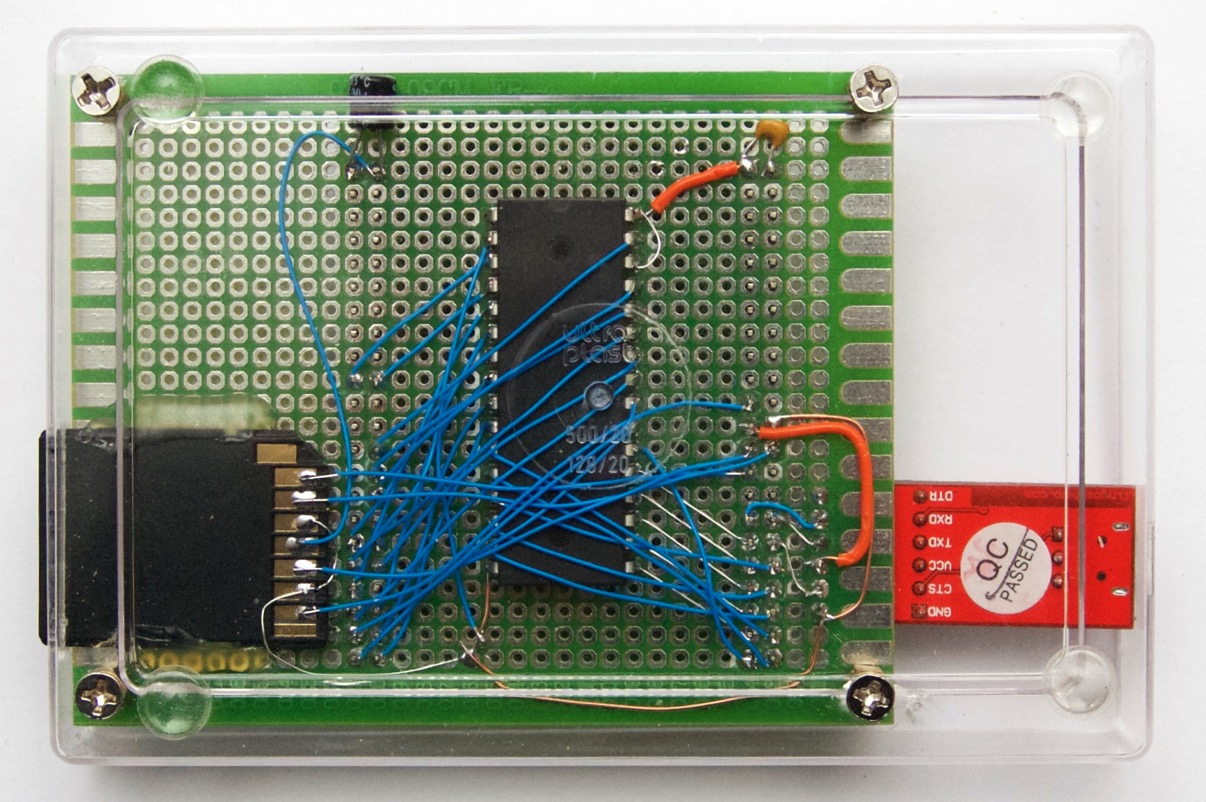 Yes, things really have changed over a period of 4 decades!