In 1965, computing history was made when DEC introduced a new computer, called the PDP-8. It was the start of a long series of incrementally improved models, later to be followed by the even more successful and ground-breaking PDP-11 series, and then the VAX. It’s a fascinating story, because so many technological trends of that time have shaped what we now use on a daily base, from laptops, to mobile phones, to watches.

Let’s get some historical context first - we’re in the year 1965:

But perhaps the most telling metric of that time is the amazing revolution made possible by the introduction of the integrated circuit - before the PDP-8, everything had to be constructed from individual components. Here’s the IC’s development path, as summarised by Wikipedia:

Think about it: a few years after the first PDP-8 was produced, a “chip” (from the incredibly successful 7400-series introduced by TI) could replace no more than a handful of gates!

And to get a bit more perspective about the mindset of those days: Ken Olsen, the founder of Digital Equipment Corporation which created the PDPs, said in 1977 that:

“There is no reason for any individual to have a computer in his home.”

(note that he was talking about home automation, not ruling them out for other purposes)

So here we are, half a century ago. Computers were huge colossi, sitting in large noisy rooms, drawing kilowatts of power, and operated by a small group of specialists. Nobody considered these things useful, other than to speed up numerical calculations. Time on “the machine” was so costly, that everything was focused on optimising the computer’s time, not that of us people.

And then came the first minicomputers - most notably the DEC PDP-8 and the Data General Nova. Here’s a picture of one of the first PDP-8’s, with the panels removed to show its innards: 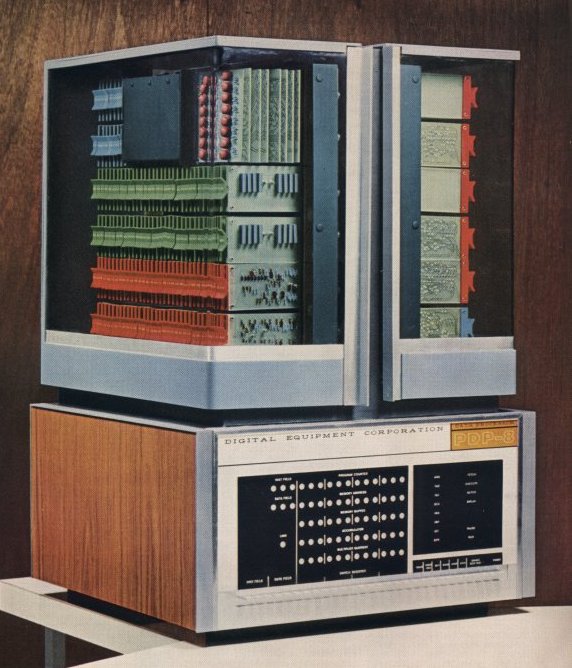 Yeah, it’s called a mini-computer! (image from the SMECC museum in Arizona, US).

There have been many PDP-8 models, over the span of about a decade. Here are a few of the highlights, from Doug Jones’ site - a huge resource for everything related to these machines:

Here is a PDP-8/f, a slightly newer version of the PDP-8/e, from The Old Computer Hut site: 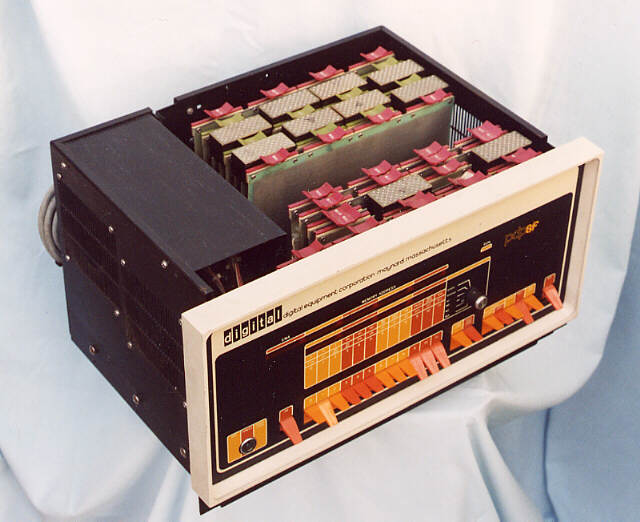 A hefty switched power supply on the side and cards which push into an “OMNIBUS” connector board on the bottom. This still uses 4K words of core memory, expandable to a whopping 32K.

One of the distinguishing features of computers from this era is their “programmer’s console” - a row of switches and a bunch of lights which indicate the content of some registers in real time. You can stop the machine dead in its tracks by flipping the STOP switch, examine memory, even “deposit” new values in it, and then continue execution. How’s that for debugging, eh?