Ok, so now we have our computer. How does it interface to the real world? How do we talk to it? How do we tell it what to do? Do we login to it? Or is it all about switches and blinkenlights?

The main interface was the teletype, a big and noisy hardcopy printer, keyboard, paper tape reader, and paper tape punch, all in one. A marvel of mechanical (not electronic!) engineering: 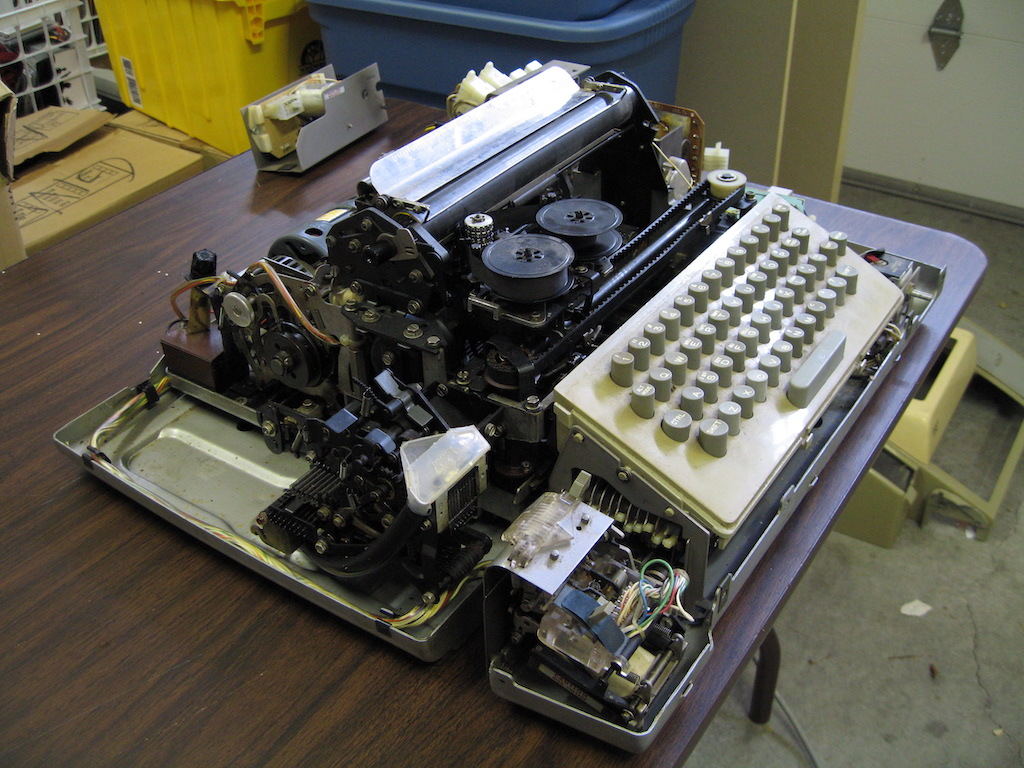 The communication speed was 110 baud serial, using the same start/stop bit stream we still use today. That’s about 10 characters per second. The paper punch ran in parallel with the output, so you could “save” what was being sent to you and then later re-enter it, as if you typed it in.

In the early days - or if you had no budget for anything fancier - that was it!

To save 2 KB text, i.e. roughly one typed page, on paper tape you had to load empty paper tape in the punch, start the printout, and listen to a very loud paper punch, pressing holes in the tape for well over two minutes. Oh, and some “lead-in” and “lead-out”, i.e. blank pieces of tape at the front and the back to make it possible to load the tape and run it through without problems.

The paper tape got jammed, you say? Pity. Just start over, if it wasn’t damaged too much.
You want to make a safety copy, just in case? Sure, just start the reader and punch in parallel.

Later on, much faster “high-speed” optical paper tape readers were introduced, which greatly reduced the noise and time spent, but paper tape just isn’t such a great medium when it comes to kilobytes of data. Not to mention the storage needs and keeping track of it all (in handwriting).

Meet the DECtape unit (image from the Computer History Museum): Here is an 18-second video of how they worked. Each tape can store up to 280 KB of data, and because of the “tape marks” it was able to seek to any block on the tape and read or re-write it as needed. Beats paper tape, but it still took a lot of time just shuttling around to access each block.

The DECtape unit was quite expensive (a TU56 dual unit w/ controller was $5,500 in 1974), but the tapes themselves were cheap, so you could have virtually unlimited storage. Some technical specifications, from pdp8.net:

DECtape was pretty convenient to handle, and one tape can store about 140 pages of text, but the Achilles’ heel was their seek time: over half a minute just to get from one side to the other.

Note the units: kilowords and megawords. That RK05 became a workhorse, also for the PDP-11 later on, but at a steep price: $7,900 per drive + controller. And to be practical you really needed two, otherwise there’s no way to make backup copies or move large amounts of data around! 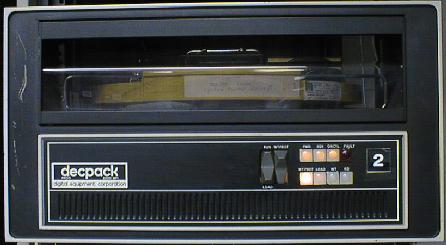 Let’s compare this to today: a 16 GB µSD card costs around €9, read and write speeds are in the tens of MB/sec range, and there’s no seek time, as the card has no moving parts. Oh… and no controller either - any µC with 4 spare I/O pins can read and write from this thing. That’s 6,000 x the storage of an RK05 pack, 10,000 x as fast, and 1/1000th of its price (per unit, not byte!). Not to mention physical size and power consumption differences…