Now that we have seen how to push out values to the DAC without CPU intervention… can we do the same for acquiring ADC sample data? The answer is a resounding “yes, of course!”

And it’s not even hard, requiring less than two dozen lines of code (full details on GitHub):

The setup calls the “+adc” and “adc” words, defined earlier for simple polled use of the ADC, and also sets up a timer (again, to define the sampling rate) and the relevant DMA channel.

Let’s have some fun. Let’s first start the DAC via DMA to generate a sine wave, and let’s then also set up the ADC to read and sample this signal back into memory. As set up here, the ADC’s DMA channel saves its data in a circular fashion and keeps on overwriting old data until reconfigured.

And while we’re at it, let’s also plot that acquired data on the Hy-MiniSTM32V’s LCD screen - to create a little one-channel scope (but without triggering, so the screen won’t show a stable image while this code is running). Here is the main logic (see GitHub for the whole story, as usual):

The DAC is fed sine wave samples at 0.5 MHz, and the ADC is driven by a timer running at 502 cycles, i.e. about 71.7 KHz (just because that gave a reasonably stable display - there’s clearly aliasing involved at these two rates). The DAC has a 4096-sample buffer, the ADC has only 301.

The “begin ... key? 0= while ... repeat” loop then produces an oscilloscope-like result on the screen, continuously refreshed at about 20 frames per second. By tinkering a bit with the “border” and “grid” code, we can actually add a pretty neat graticule to this screen as well: 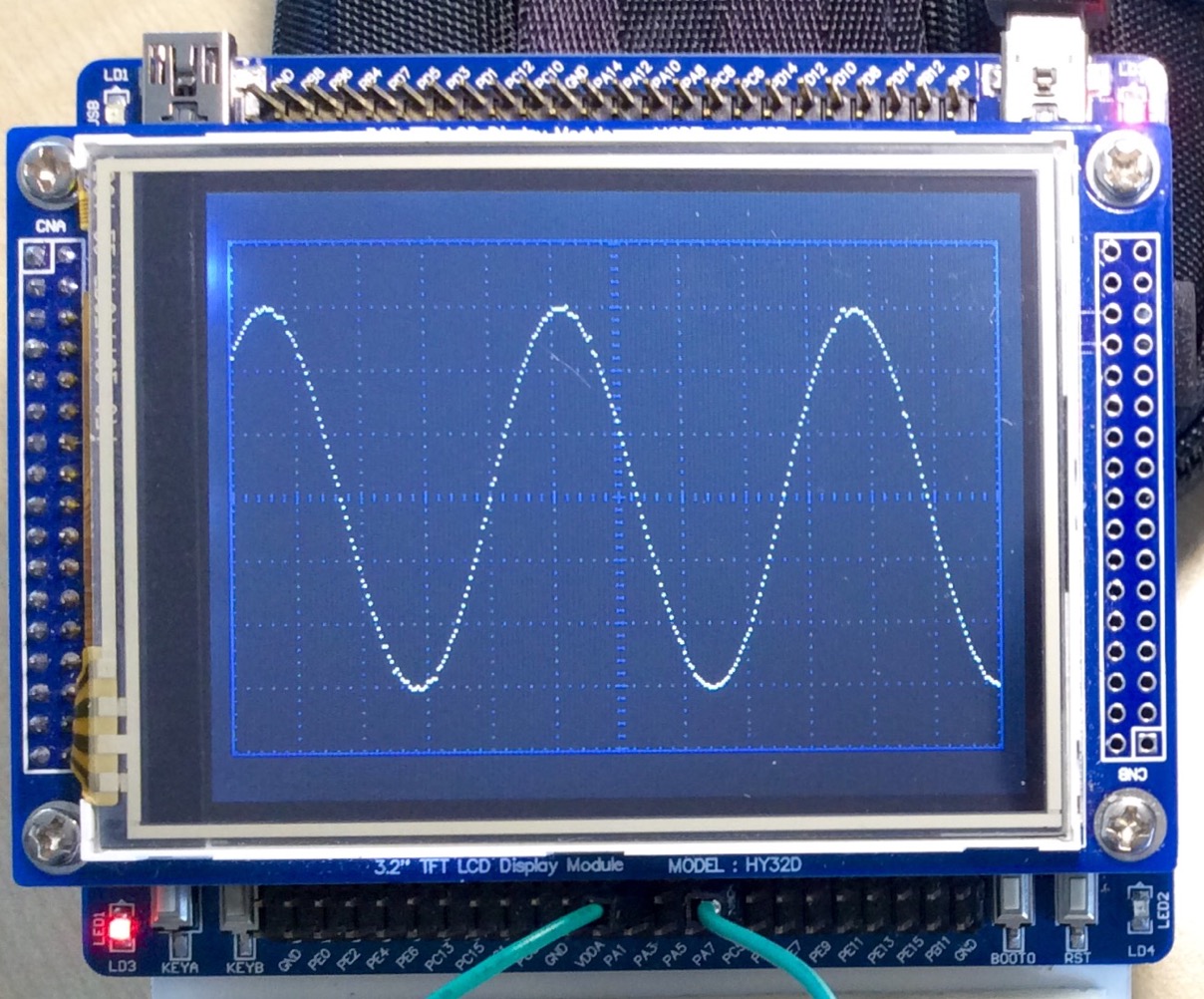 Let’s examine the above main loop in a bit more detail:

The logic behind this approach is that clearing the entire display on every pass produces a highly flickering result, as display updates are not synchronised to what the LCD controller is doing. With 30 ms to clear the screen, we’d see part of the screen blanked out, and that at every pass.

So instead, we write the pixels of the trace as we capture them, leave them on the screen for a while, and then clear those (and only those!) pixels again. That’s 250x fewer pixels to update.

Bingo - a crude-and-simple (but pretty!) capture of analog data, constantly updated on the LCD. When a key is pressed, the loop exits and leaves the last trace on the screen. As mentioned before, there’s no triggering, no config, no scaling, no line-drawing interpolation in this demo.

With a loop which only takes 8 ms (plus the 40 ms wait), there is ample processor “headroom” for all kinds of improvements. Filtering, decimation, smoothing, sinx/x traces? Go for it …

Note how the DAC and ADC hardware is driven entirely by the two DMA engines, with the CPU free to perform the main logic and rendering. All this took under 500 lines of Forth code.

DMA is like having a multi-processor under the hood, all inside that one little STM32F103!