The task to be tackled here is measuring voltage ranging from +N to -N Volt with an ADC input which needs to be kept in the range 0 to 3.3V.

There are numerous resources all over the web which solve this puzzle. The focus here is to help you get some intuition, and not just to come up with a solution and its “explanation”.

If this is new for you: hang in there. You’ll be surprised how logical electronics can be…

Negative voltages are everywhere - just flip the two leads of a power supply or battery, and you’re there. That’s because “positive” and “negative” are relative concepts, i.e. a voltage is always between two points. It has become common to call one of those points “ground” - even when it’s not actually connected to “earth” using a conductive rod into the real ground!

Many circuits we use are in fact floating, with no real earth connection whatsoever. Most power supplies and bricks / wall warts tend to be isolated from real ground, even when the AC mains receptacle includes a true ground pin. It’s much safer that way - when two circuits float, there won’t be a significant current when you happen to touch both of them (actually, there is a minute leakage current, which can create a slight tingle or make a metal surface feel “funny” - but that’s totally harmless, and several orders of magnitude below the levels which require attention).

This all changes the moment we connect equipment together via conducting wires: from then on, we’ve established a path for electrons to flow, and everything else starts to have a defined voltage relative to both connected devices.

When we use USB to power a small µC board, the USB’s power source defines a ground level as far as all the signals go and the power it supplies. We can’t plug in a second USB cable and touch its ground line to anything on the µC other than the same ground level, without causing a short, and possibly even damaging stuff.

Ground is a great convenience, it’s the basis for power transfers and for communication.

Once we do have a ground, it’s quite possible for some signals or power lines to be lower than that level, and these are then called “negative”. Note that this is still just relative to that ground level we used as reference. There’s nothing different about negative voltages, they’re just lower!

Back to the ADC. It doesn’t like voltages below ground, i.e. under 0V - relative to its ground.

But to measure negative voltages, we can use a trick. This requires two resistors in series: 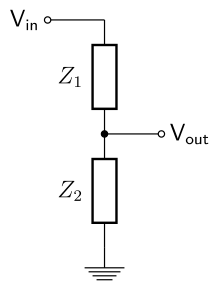 Our unknown voltage is Vin, and the bottom is our common ground. If we measure the voltage at Vout (relative to that same ground), we get a smaller value. Welcome to the voltage divider. There is nothing magical about this essential building block in electronics - here’s how it works:

We have divided the voltage Vin by two … for any Vin and for any (identical) Z1 and Z2 values.

Voltage dividers are everywhere. You will now be able to recognise them with your eyes closed.

Note that we can measure voltages well over 3.3V with this: connect the input voltage to a suitably-dimensioned voltage divider, and connect the ADC’s input to Vout.

But what about negative voltages? Almost there. We just need to play a little trick with ground levels. Instead of connecting the voltage divider’s lower end to ground, we connect it to 3.3V: 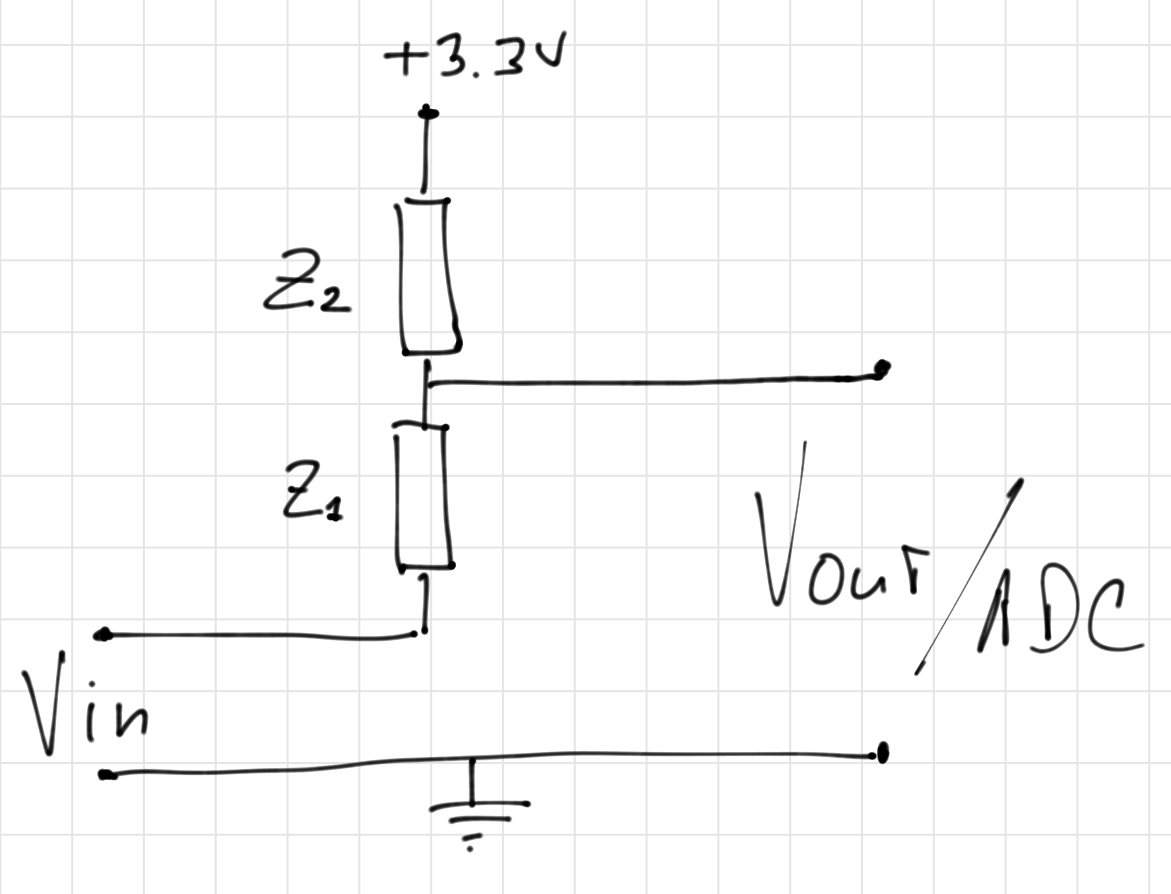 This is still a voltage divider. It merely works the other way around:

There are some fairly serious drawbacks with this circuit, but that’s for the next article…