There are not really that many changes from rev3 to rev4 of the JeeNode Zero. The main one was to extend the main header by one more pin, and to move the radio module to other pins so that all of PA0..PA7 are now free to use - these have the most fexibility for general use (up to eight 1 Msps 12-bit ADC’s!), and also bring out the DAC (D-to-A converter), which is on PA4.

The schematic for rev4 is as follows, the final design files will be added to the wiki later: 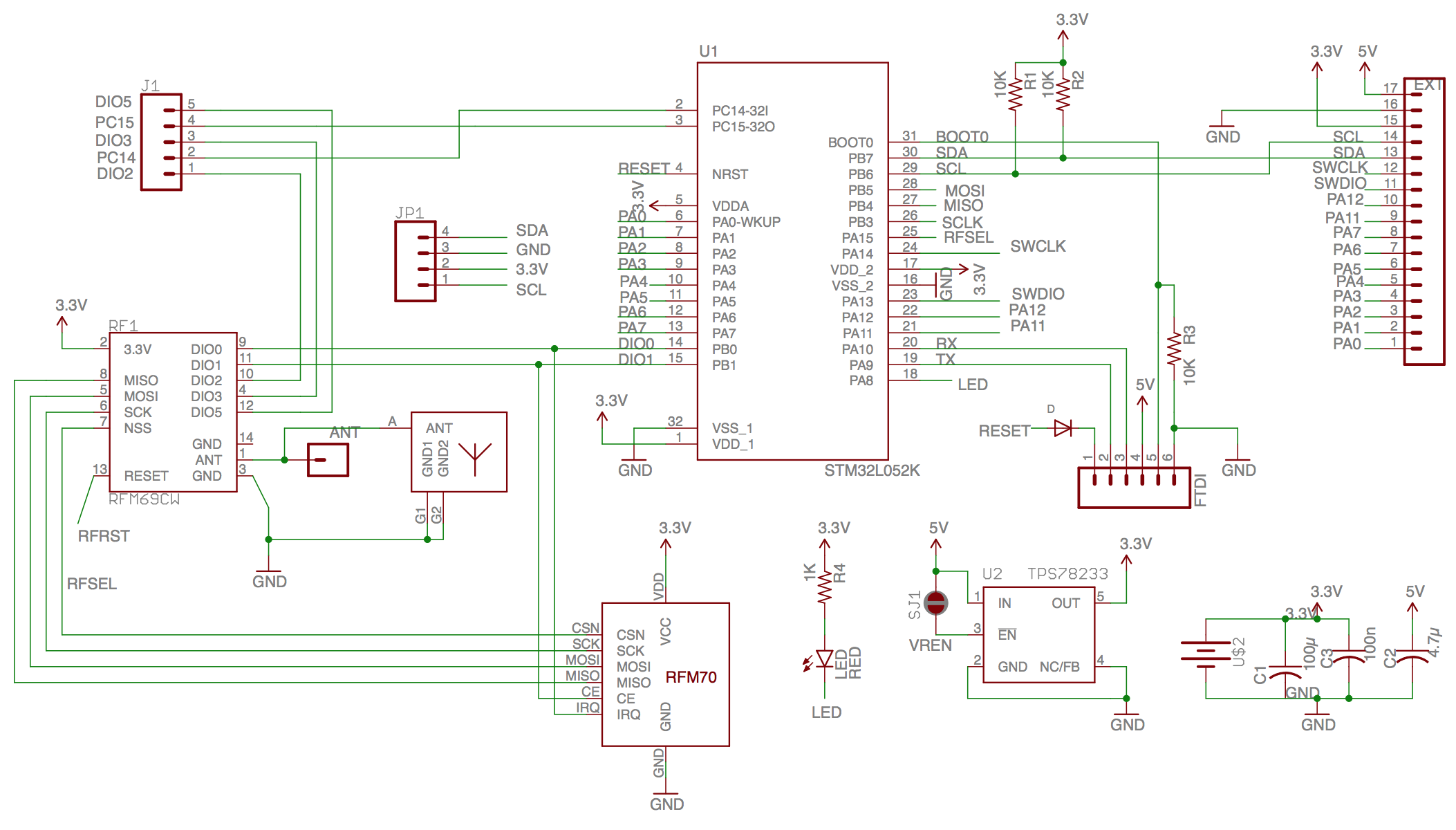 The RFM69 radio is now connected to the following alternate SPI pins:

Two of the DIO pins are also permanently connected to dedicated µC pins:

The DIO2/DIO3/DIO5 pins are available on the 5-pin “aux” header, as well as PC14 and PC15, from the microcontroller. This allows manually connecting two out of three to the PC14/PC15 pins, just next to them, but you could also wire them up to the main header with short wires.

The radio’s RESET pin is no longer connected, a wire could be attached directly to the module.

PB6 and PB7 - which support I2C - have been flipped, so that the main header now has a more common “GND +3.3V SCL SDA” order, for directly attaching some matching breakout boards.

Two 10 kΩ pull-ups are now permanently connected to PB6 and PB7 for I2C bus use.

By maxing out all the I/O pins, you can assign up to 18 pins of this board to your own projects: 14 on the main header, 2 on the aux header, and 2 on the FTDI header. Those last two are only available if you don’t need to use serial communications, of course.

The board dimension has changed slightly - rev4 is a bit longer, with the FTDI header moved 0.1” outward so it no longer sits between the main and aux header, but just left of them.

There’s a new connector for I2C + power, which will be used to connect future small boards to the JeeNode Zero. The layout is compatible with the four centre pins of existing I2C-based “JeePlugs”, so one thing you could definitely do is wire ‘em up (and even daisy-chain a few).

Apart from the slightly different pin choices for the RFM69 (or 2.4 GHz RFM7x) module, rev4 should be fully compatible with the software that’s already been written for rev3.

Coming next: the adjusted JeeNode Zero board layout and silkscreen…