Let’s put the JeeNode Zero to work a bit, i.e. let’s repeatedly measure an analog voltage through its ADC, send the results over to another node via the radio, and display the received readings.

We’re going to need a test setup with two wireless nodes. Something like this, for example: 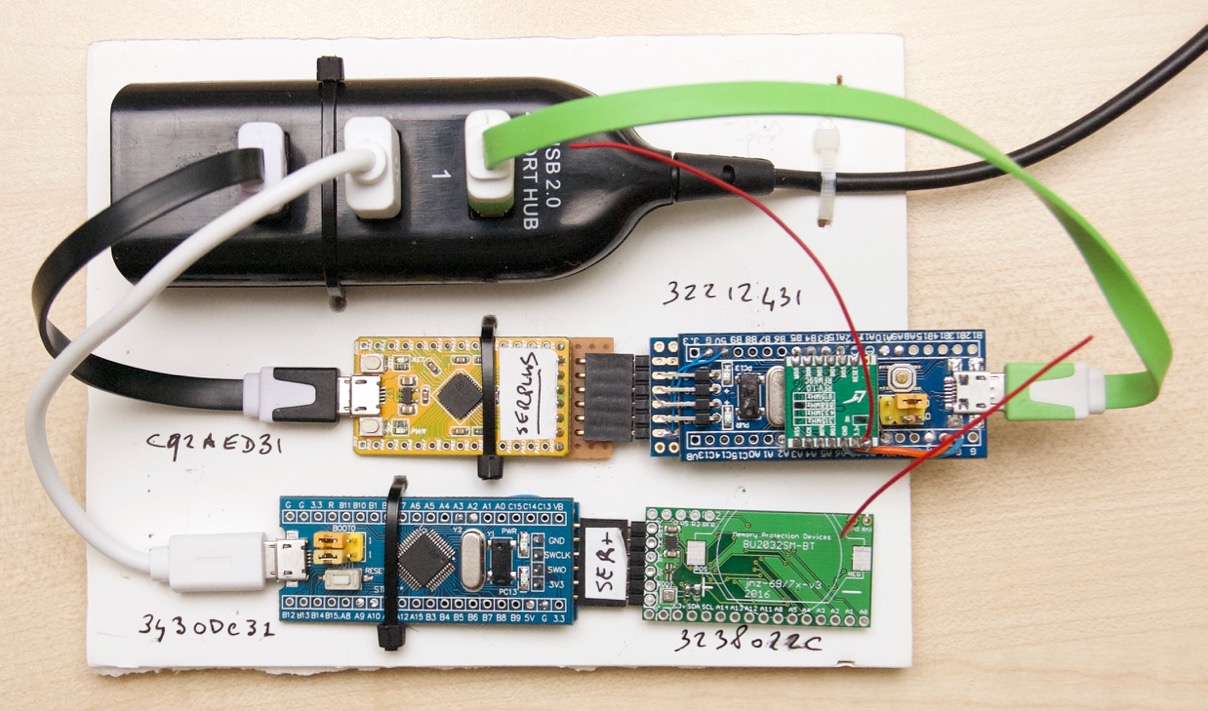 We’ll use the JNZ as sensor/transmitter and the F103 as receiver.

This example assumes that everything is properly connected, and that suitable always.fs, board.fs, and core.fs sources have been installed on both nodes, including the RF69 driver.

The first step is to try out the ADC, by reading the voltage level on PA0 a few times:

Next step is to do this repeatedly in a loop:

Ok, that works. Note that we had to force a hardware reset to get the prompt back, since the JNZ was placed in an infinite loop. This is the easiest approach and good enough for now.

This uses rf-txtest, which takes one value off the stack, converts it to a text string, and sends that as message in an RF packet.

Note that we have to re-initialise the ADC, since we’ve reset the µC and therefore also its ADC.

Hmm - maybe it’s working, but how can we tell? Well, by keeping this running and connecting a second terminal to the F103. The rf-listen command is a quick way to see incoming data:

As you can see, there are many $30..$39 hex bytes in the received data payload (the first block of hex info is metadata, as described in this article). These are the “0”..“9” ASCII digits, in hex.

To turn this information into more meaningful values, we need to decode this data, i.e. make assumptions about the packet format and interpret it as ASCII-encoded digits in this case.

We can’t use the rf-listen code for this, so we’ll need to implement something similar instead. This is fairly easy to do, starting from this original code on GitHub:

Here is a modified version which will print the packet as string:

This calls rf-recv in an infinite loop. Whenever the result (the number of bytes received) is not zero, we set up a call to type with two arguments: the address to start printing as string and its length. But because the first two bytes of the received data contain a header we don’t care about, we need to skip them by adding 2 to the address and subtracting 2 from the length.

If we save this definition to a file called rxtest.fs, we can then load and use it as follows:

That’s it for an example of remote sensing - the JeeNode Zero is taking ADC measurements once a second and sending this data wirelessly to another F103-based node, which then prints out all received results. There’s a lot which could be improved upon, but hey - it’s a start!