To try out RF communications, we need to go through a number of steps:

Let’s jump right in… by the end of this one article, you’ll have it all.

Here is a 2-node setup, one via a USB-BUB type board, the other via a HyTiny-based SerPlus:

By running two instances of Folie, each in their own terminal session, and making sure that we can connect and easily reset ‘em with Ctrl-C, everything is ready for some Forth development.

On the receiving end, it can’t get any simpler than entering “rf-listen”.

For sending, the first test is to manually send one packet with “123 rf-txtest”.

The result is that you should see one packet come in for each one sent out:

As you can see, the payload contains the ASCII representation of the number sent out, in hex.

Excellent! This shows that all the hardware involved is doing its job.

Next, let’s continuously send one packet per second, with an incrementing counter in it:

It’s the same rf-txtest call, but now as part of a loop. The receiver output will be:

Not all packets are guaranteed to arrive. As you can see, we got packets 0, 1, 2, and 3, missed packets 4 and 5, and then got packet 6. That’s to be expected - it’s not that these sensitive radios are so unreliable, we’re simply placing them far too close together - even at minimal power, the radio waves from the transmitter will overload a receiver placed a few cm away!

To quit the infinite send loop, we can press Ctrl-C to get the Forth prompt back. Since this resets the JNZ, all code in RAM will be lost.

The transmitting node is now sending one packet every second. The rest of the time it’s just twiddling its thumbs and wasting energy. Let’s fix that:

As before, running this should produce new output once a second on the receiver end.

Actual power consumption measurements will have to wait for another time, but the average current draw is likely to be under 10 µA, some three orders of magnitude lower than before.

Which means we’re almost ready to run the transmit node off a coin cell - but there’s a snag: the blips code lives in RAM, so the send node won’t start when simply powering it up.

For such unattended operation, we need to save the blips code in flash and add logic to start it up immediately after power-up (or reset). Appending to flash is a matter of telling Mecrisp:

Automatic startup is also easy: Mecrisp looks for an “init” word on startup, and launches it.

But it’s also a bit risky. What if there is a mistake in the code, or we want to change it later? Once a new init is installed, we lose the default command-line prompt! Even a hard reset won’t get it back, since it’ll simply launch that same init override again.

The solution comes in the form of a special unattended word, defined in board.fs. This is designed specifically for making init overrides safe:

Some notes of what’s happening, since it’s fairly critical to get this right:

The unattended escape hatch is that when connected to a serial port, anything after it will be skipped. Instead, this init definition will immediately return to the Forth command prompt.

If you run the above and reset the board, you will see that nothing happens. You still have to start everything up by manually entering “lptim-init rf-init 0 rf-power blips”.

But that’s exactly the point. Even when a node has been set up to automatically go live without serial FTDI connection, the development workflow remains unaffected.

5. Running off a coin cell

And now the real test - we take the JNZ out of its FTDI connector and insert a coin cell: 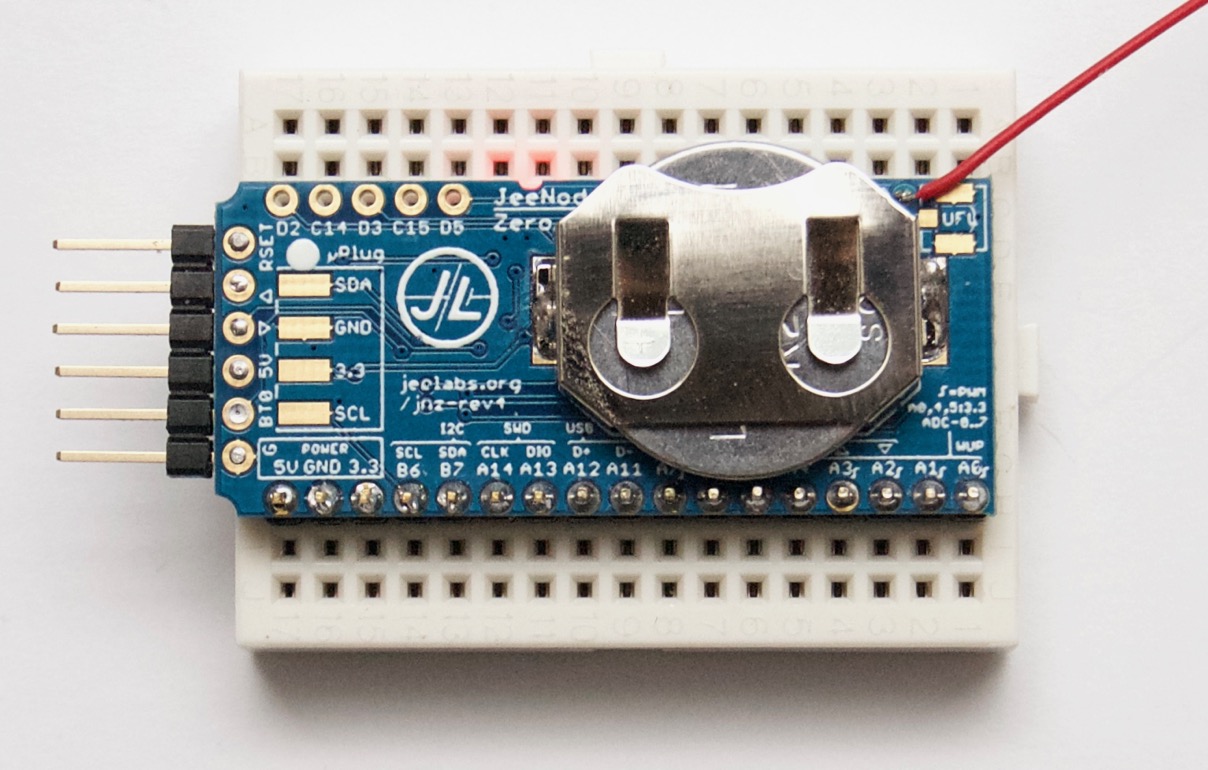 (see the red glow? more on that in a moment…)

And here’s some sample output printed by the receiver, while moving away a bit:

But… whoops, there’s a silly little mistake in there: the LED is still on, drawing some 2 mA. Leaving that LED on would drain the coin cell within a matter of days…

So as last step, here is how to fix the LED issue by installing an improved version:

That’s all. With a mean current consumption in the 10 µA’s (i.e. sleep mode + transmit power use), this node should be able to run at least a year or two on a fresh coin cell. Piece of cake!