Before moving on to the topic of this article, let’s figure out the problem that came up in the previous one, where adding an OLED display made the rotary encoder readout unreliable.

The problem is caused by the OLED’s display update code, which takes some time:

That’s about 48 milliseconds to update the display. Over half of this time is caused by the way digits are drawn on the display, which uses a very crude approach: pixel by pixel drawing (!).

As a result, our code is not tracking pin changes for 48 ms. This not only means it can miss some rotary encoder pulses, but also that it may see some “impossible” transitions from one A/B pin readout to the next. This will happen every time a pulse comes in, i.e. when it matters.

The solution is to track pulses with interrupts. We could for example check the pins really often, say every millisecond in the SysTick interrupt handler, but it’s going to be a lot more effective to set up “edge-triggered external interrupts” for pins A & B.

Setting up EXTI’s on an STM32 µC is quite involved, as there’s a lot that has to be configured just right: the NVIC has to handle two new interrupts and the EXTI peripheral has to generate those interrupts on each falling edge on PA3 and PA5. The code is in ex/exti.fs on GitHub.

As a test here, two counters are set up and incremented on each falling edge of PA3 and PA5, respectively. We then periodically read out those two counters and print them:

Yep, now turning the knob generates interrupts - lots of them, in fact, due to switch bounce!

With interrupts, slow OLED updates go away because the pulses can continue to be processed while the OLED code does its thing. It’ll take a little bit more work and code to turn all these interrupts into a quadrature decoder, but that task will be postponed until the next article.

Back to the main goal of this article: cutting the cord! 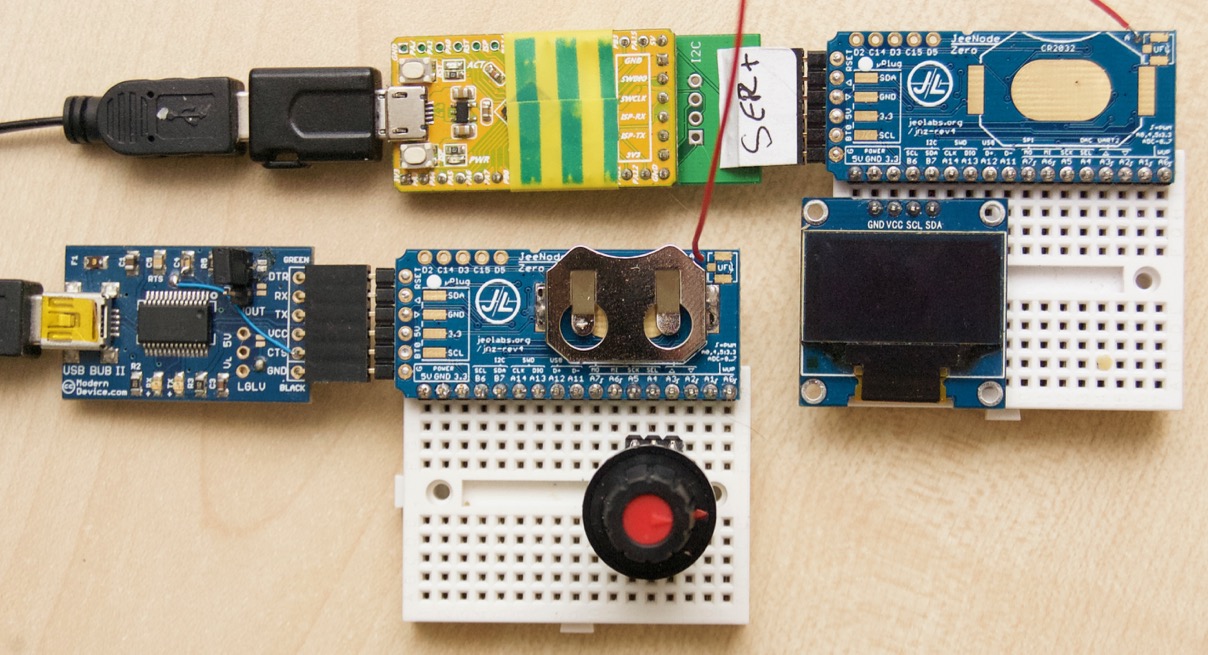 The sending side is very straightforward, now that this recent article has laid the groundwork:

I.e. on every step change: send out a packet with format code 7 and the current counter. The way to start this up is:

On the receiver end, we can start with the same rxtestv receiver code as before, printing out all the packets that come in:

And sure enough, it works. Packets are coming in as the knob is rotated! Also worth noting, is that the missed-pulses problem we had with OLEDs is considerably reduced, because sending a wireless packet takes far less time than updating an OLED display.

As a last step, we need to pick up the incoming values and show them on the receiver’s OLED:

That’s it. All the code is in jz4/ex/rot5.fs on GitHub. On the receiver, with OLED, we do:

Whereas on the sender node, with the rotary encoder attached, we do this:

Now every control knob tweak is sent wirelessly to the other node and shown on the OLED. The only wire remaining is for power (and FTDI, since the code hasn’t been saved in flash yet).