This article is about the i3 window manager (and also, further down below, Ranger): 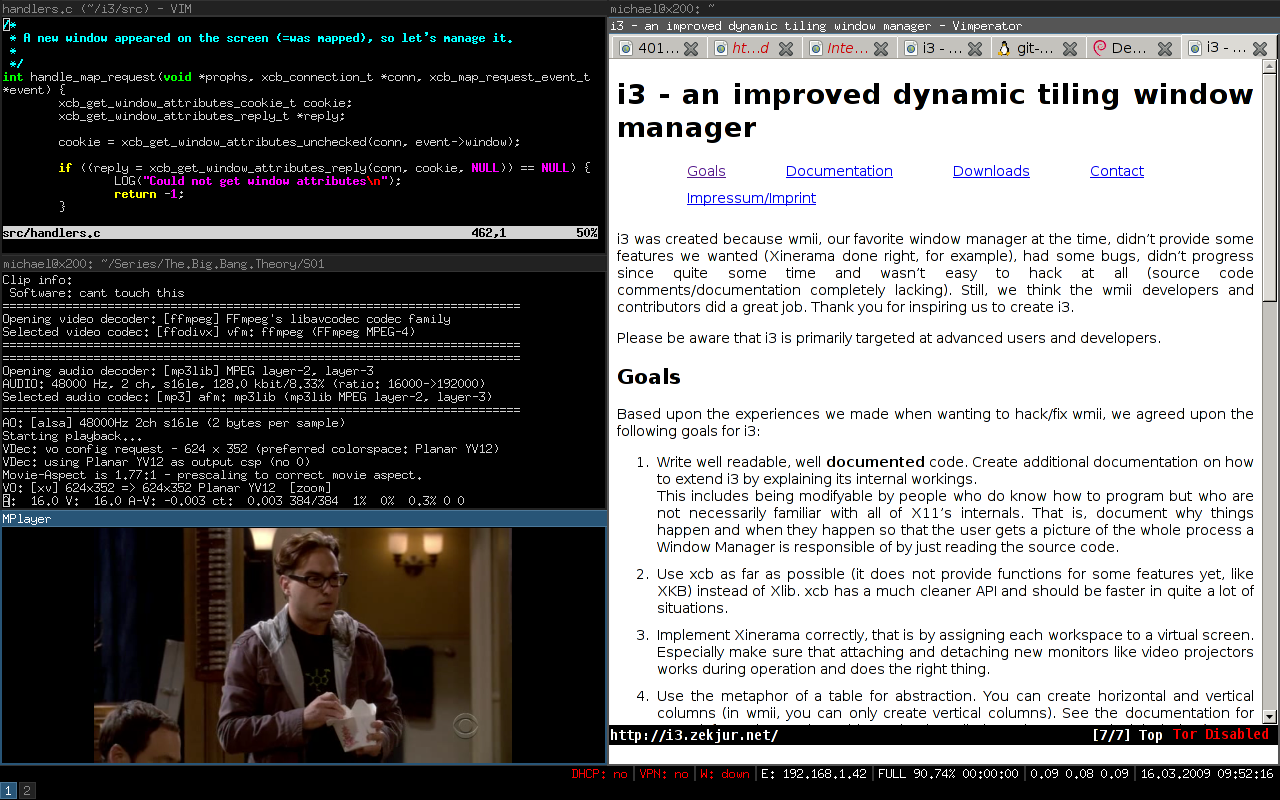 Its main distinguishing feature is that is uses tiling as visual layout mechanism.

While the mouse and floating/overlapping windows can still be used relatively easily, i3 is really geared towards keyboard use: for switching focus around and creating new windows, but even for moving windows (i.e. panes) around or resizing them. In addition to carving up the screen into panes/tiles, there are also multiple screens, to set up multiple visual contexts.

For the keyboard, i3 uses a “mod” key to trigger all actions. On the Mac, the “command” key works well. Creating a new shell window is then simply a matter of hitting cmd+enter.

The easiest way to see what i3 is about is through videos. There are a few on the i3wm.org site.

The main/original author of i3 gave a good (hour-long) introduction several years ago: 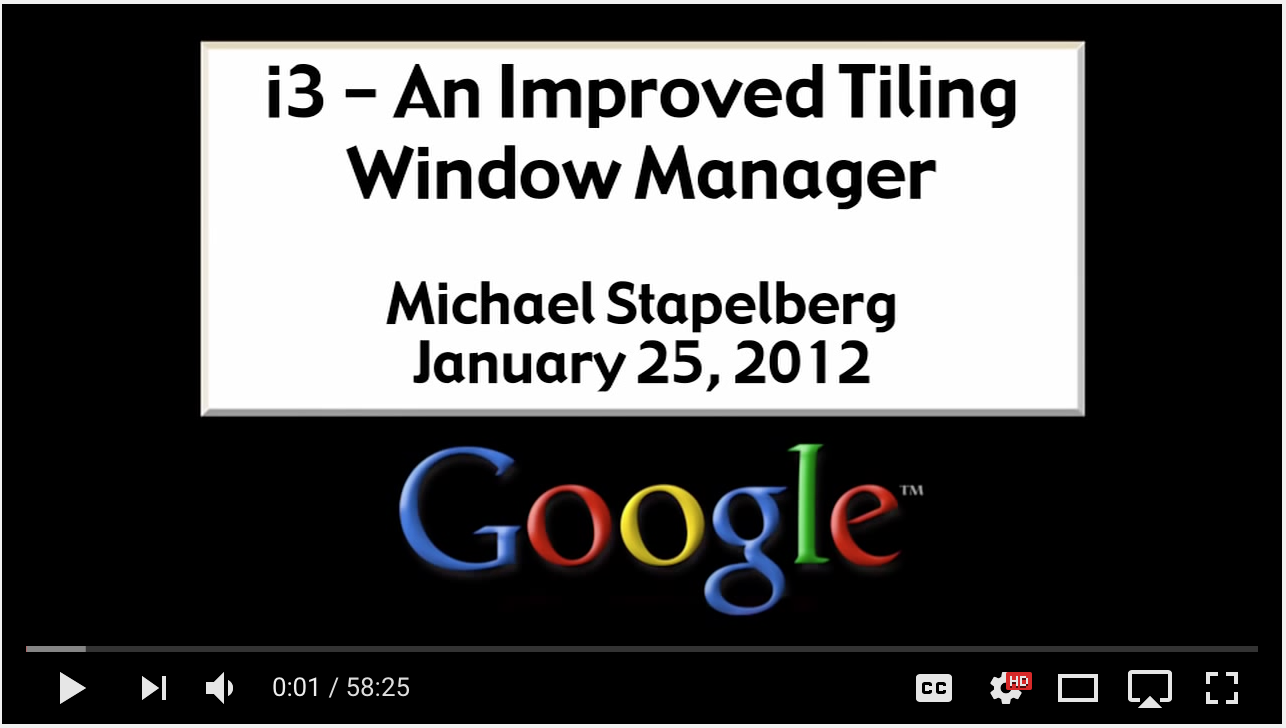 For a somewhat shorter and more fast-paced introduction, see this video series by Alex Booker:

While it’s definitely not for everyone, the big win of i3, is that (apart from being keyboard-based) you can stop constantly fiddling with window arrangements. Each new window you create / application you start will tend to end up in a reasonably useful position. And even if not: a few key presses can adjust its size and position, or move it to another screen.

With i3 as tiling window manager, it’s easy to split up the screen such that all the things you need can be arranged optimally. Even on smaller laptop screens (probably: especially on…), juggling the scarce screen real estate becomes second nature as these keys start to “stick”.

For many use cases, this should be enough: vim for editing, bash/zsh command line shells, and browser windows will all play well together.

And then there is Ranger, a text based file browser with vim-like key bindings. You can check out this 9-min video by Luke Smith to get an idea of how it can be used and configured: 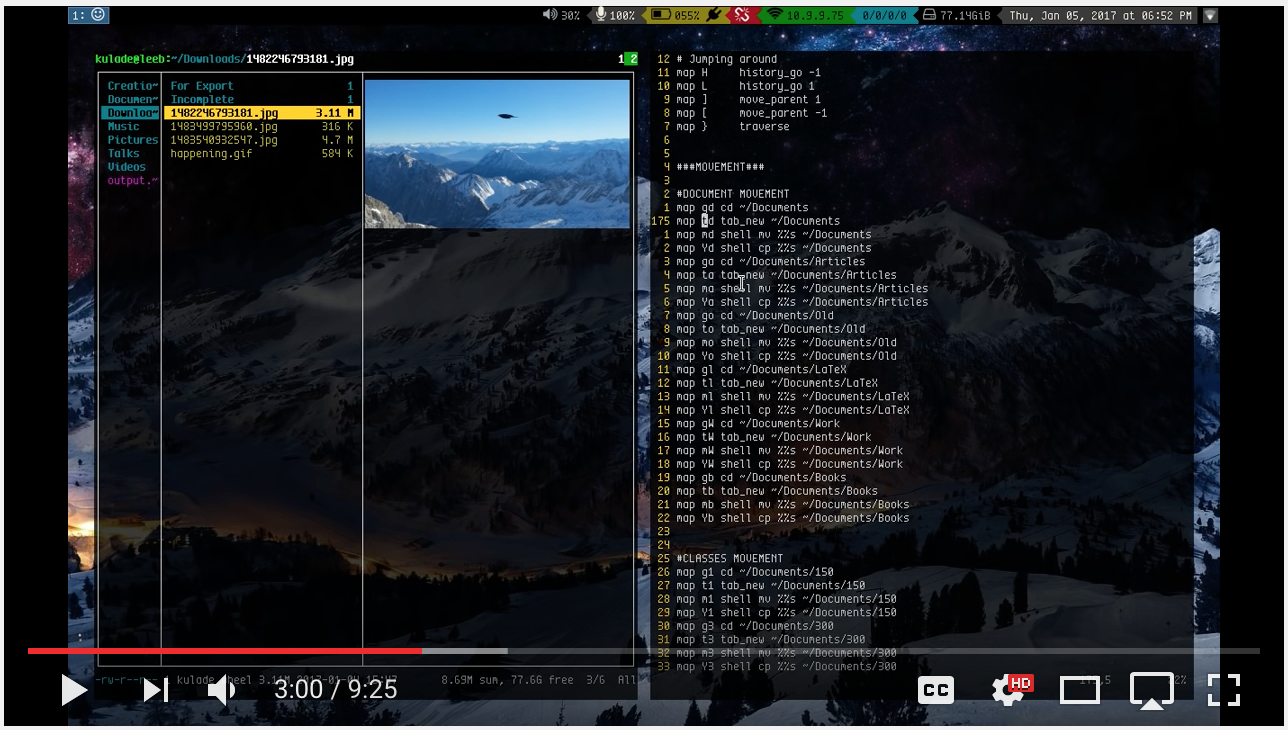 It might seem like a huge step back to the days of Midnight Commander (which I’ve never used myself), but there are some intriguing properties which could still make it worthwhile, IMO:

Time will tell whether Ranger is indeed useful enough to earn a place in my permanent toolset.

And what about qutebrowser? A full-fledged browser with: you guessed it… vim key bindings! There’s a nice 15-min video for it, by “msjche”. Is it a bridge too far? Maybe. Yeah, probably…

Anyway, let’s summarise these recent posts as “the aim is NOT to aim” and “grok your keys”.