The title of this article is perhaps a bit misleading: it’s not just about developing code which needs to run on different platforms, it’s also about using different programming languages.

Over the years, here at JeeLabs s/w development has always been about more than getting stuff working on one CPU: we want display and control tied to our laptops and mobile devices.

With µCs which collect and exchange data, multi-platform development is inevitable.

At some point, it might have been worth considering writing everything in C/C++, from the embedded µC to say a central Raspberry Pi, with server-side rendering of pages (as is still the model for PHP). But we’ve all seen the benefit of running something other than C on the server, and of course the browser world has been completely taken over by JavaScript. With rich “single-page applications” (SPA) taking over more and more of the user experience. And for good reason: we get astonishingly powerful and intuitive user interfaces (and eye-candy…).

It might seem that writing at least the server- and client-side using the same language is a good way forward. IOW: NodeJS on the server and JavaScript in the browser. And while JavaScript on a µC is definitely feasible, it’s not a convincing match in terms of performance and code size.

Meteor is one well-known example which tries to merge server- and client-side development, to the point that you can develop both sides as a single system, sharing code as much as possible.

There are some caveats with that approach: 1) developing in the same language on both sides ignores the fact that they deal with completely different problems (and that staying in the same context can actually be very confusing!), and 2) even NodeJS is a bit hefty for low-power Linux boxes such as Raspberry Pi or CHIP (it tends to fill up RAM when running for months on end).

So if JavaScript 1) can’t be avoided in the browser, 2) is not a great fit for low-power central always-on servers, and 3) doesn’t fit on low-end remote µC nodes, what’s the alternative?

Here’s the solution I’ve been moving towards for quite some time now:

Both Forth and C/C++ fit easily, even on small µCs. They are both compiled code, so they don’t waste time running an interpreter. And they both go all the way down to the bare metal, so that full control of all the embedded hardware is always possible.

Go could be called “modern C/C++ for servers”: garbage collected, modern interface-based composition, and channels plus “goroutines” to tame multi-threading and asynchronous tasks. Without the race-condition risks that usually come with threads and interrupts. As bonus, it’s trivial to produce stand-alone executables in Go for over a dozen platform / OS combinations.

To borrow and re-purpose a phrase from ClojureScript somewhat:

Which brings me to the main topic of this article: how to deal with all this, as a developer?

The answer is: with a bit of care, the entire development process can be streamlined to a very comfortable level. Here’s what it comes down to (a lot of this is personal preference, of course):

I very much prefer to work on Mac, although I’ve been using Linux (and Unix) longer than I can remember, and feel very much at home on its command line (GUIs are another story: too inconsistent and quirky for my tastes). Here’s the screen layout I use most often on my laptop: 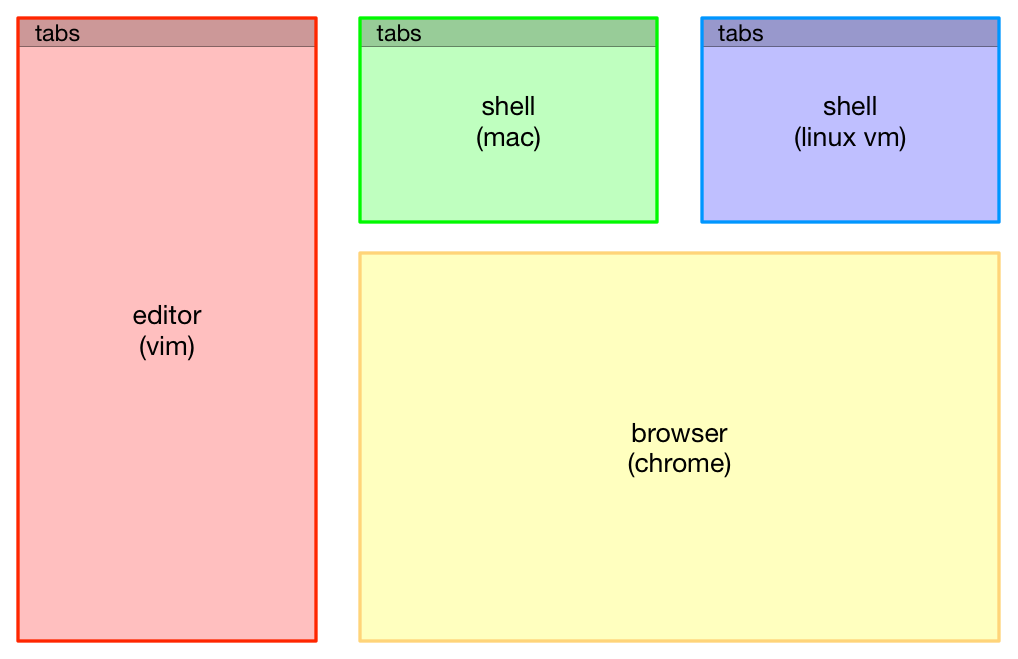 For purely text-based work, I’m still considering using the i3 window manager, on a screen of its own in Linux. But as soon as browsers and other GUI tools are involved, the Mac has my vote.

There are two ways to run Linux on this same machine:

In both cases, it’s easy to call into Linux using SSH and have it show up in a terminal window on the Mac side, as shown in the blue box above. Both can be configured to share areas of the underlying macOS file system, so you don’t have to copy stuff across - you can just “cd” to the right place. Source code can be edited on macOS and Linux will see the changes, and vice versa.

A virtual machine could also be used to run Windows (at the same time, if you have enough memory), but there’s little incentive for me to go there - other than to try out a Go application built for Windows, perhaps (using “GOOS=windows go build”).

Virtual machines have come a long way, at least with Parallels Desktop for Mac version 12. And it shows - on the USB side, for example: when plugging a USB device into the laptop, you can choose whether to connect it to macOS or to one of the running VMs. This now works so well that where FTDI caused infinite grief (in the form of kernel panics!) for many years, all of these issues go away when the device is tied to the Linux VM, making it do things the Mac (or rather: FTDI) never got right, like controlling both the DTR and the RTS pins over a serial USB link.

As a result, I can now launch Folie on Linux, while working on the Mac laptop, and all is well: Ctrl-C to reset the attached µC and “!u 6” to upload Mecrisp to a JeeNode Zero - \o/ - yeay!

Another aspect of Linux is that it can run qemu-user-static, which can launch an ARM-based executable on Intel hardware. This offers an astonishingly transparent form of emulation: once installed, Linux will automatically recognise the ARM file format and insert the Qemu layer.

Quite a convenient setup, all in all: macOS, Linux, Windows even, and the ability to run ARM executables, like the Linux build of Mecrisp Forth. All on one laptop, using a single file system.

To give you an idea of what Docker can do, let’s create a “container” with qemu-user-static and Mecrisp for Linux (i.e. ARM), which will be launched every time we fire up the container:

With that Dockerfile, and a copy of mecrisp-stellaris-linux in the current dir, we can do:

Lets give it a friendlier name:

The result is a “container” image, which is Docker’s terminology for a snapshot of the state after the above process completes (i.e. a download plus apt-get to install qemu-user-static). Now that we have such an image, we can launch the Mecrisp setup almost like any other application:

That’s really all it takes: just over a second to bring up a Ubuntu context (within the Mac!), launch Mecrisp (emulating the ARM code via Qemu), stop the whole process again (since I typed ctrl-d right away), and clean everything up. Should also work on Docker for Windows.

So now there’s a way to try out Forth code from the Mac command line - look ma, no hands!